Milos Bulajic aka Buba, born and raised in Niksic (Montenegro), currently based in Tivat, had his first contact with DJ-ing with his older and more experienced friend who taught him basics techniques of DJ-ing and that was enough for him to start a solo project.

His tireless desire to develop in his work and later with the production side is based on a constant search for new musical excitement. Therefore, Buba is always adapts to the new definition of house music. In his DJ career he had found himself in deep, tech and house genres.

On stage and in front of the crowd, Buba has gradually gained the trust of the most famous clubs and small pubs.
For this reason, his name appeared on a variety of events throughout Montenegro of which the Refresh Festival, Spring Break, Sea Dance and many smaller events.

Hello guys. Thank you for your time for this conversation.

How are you and where are you at the moment?

Buba: I’m great, thanks for asking. I am in Tivat.

Lèrr: Not bad, I am currently in Ulcinj, by the sea as I like the most. 🙂

Let’s get closer those who don’t know you at your beginnings in electronic music. What motivated you to start playing music in front of the auidence, when you started producing, how difficult was that beginning?

Buba: I worked in a disco where I started listening to house music, that’s where my first love was born. After that, I met a DJ, and later a friend Marko (Makita) who introduced me to a story related to mixing, so I could perform later by myself. I started doing production 8 years ago, also with Marko, who started with me from the beginning. The beginning had its charms, as well as a lot of difficulties in mastering the program.

Lèrr: Somehow music was present from a young age and I always wanted to show other people, in some way, what I was listening to then, that’s how it all started. I started producing around 2015, and the beginning was honestly not that difficult for me, because in fact everything is much more available today, and I wanted to make music even though it didn’t look like anything. With time and work, progress is made, so that only later begins to get the real meaning.

What can you tell us about scene in Montenegro? When did electronic music appear in your place and how do you see it develop over the years? Where do you mostly perform?

Buba: The scene is to say on the rise because electronic music has never been listened to here again. At least I think so. I don’t know when exactly, since the beginning of 2000. I can say that we are progressing knowing that we have many more younger colleagues who are working more and more on our scene. This year, I mostly performed at the beach bar “Verige” in Tivat.

Do you prefer to perform in a club or at festivals, and why do you like one of these two?

Buba: It’s hard for me to decide because both have their charm. I love the club because I can connect more and share energy with the people, while I also love the festival because of the open space.

Lèrr: Both, clubs and festivals have their advantages, but I always prefer a club because of its energy and a kind of “intimacy”. I prefer when people are closer to me and when I can “feel” them.

How has this crazy year affected to your music-making process? Was it perhaps difficult to find inspiration or were some new ideas coming to you that you are currently working on?

Buba: This year has been interesting somehow. At first I was thrilled to have a lot of time to create. And later I realized that you can’t always have enough inspiration and that you need to go out somewhere and rest your ears. Which says how much and excessive production can be a barrier to progress. You need to have a good balance.

Lèrr: This year had a bad effect on everything, including the creation of new music, at least in my case. I managed to finish just a few ideas, I remained aware of this side until further notice. 🙂

What is your opinion about live streaming that we have chance to watch more and more often on social networks? Do you have any favorites so far?

Buba: What else do we have left but to somehow connect and present music. Live stream is good in this situation because we have no other choice. A party is a party!
I don’t know who I could single out.

Lèrr: Live streaming is the only option at the moment, that we have the feeling that something is actually happening, which is not so bad. Well, I didn’t watch a lot of streams, but the favorite is certainly the second birthday of Progresivna Suza because everyone was somehow there and sincerely enjoyed the music. Could you single out any of the highlight moments in your career, which had an impact on your further development as a producer or DJ?

Buba: I got in touch with Musumeci, and I think that can help me a lot in my further career development. I released an EP for him that comes out in January 2021 for his Engrave LTD. It’s one of my favorite labels.

Lèrr: Well, it’s hard to single out just one moment, but if I really have to, let it be a party with Nick Warren here in Ulcinj on a beautiful location. That night I had the opportunity to meet him and talk to him, after that I released for his label. So that’s one of the moments I remember.

You have a lot of fantastic releases for various famous labels like Balkan Connection, 3rd Avenue, One Of A Kind, etc. How big step is production for a DJ?

Buba: It all depends on what someone’s goal is. For me, production is necessary to go further, if it weren’t for her, I wouldn’t be with you now.

Lèrr: Production is certainly a step higher for a DJ, especially since more and more people are starting to engage in DJ-ing. The production also provides a chance for one DJ to stand out in the crowd. 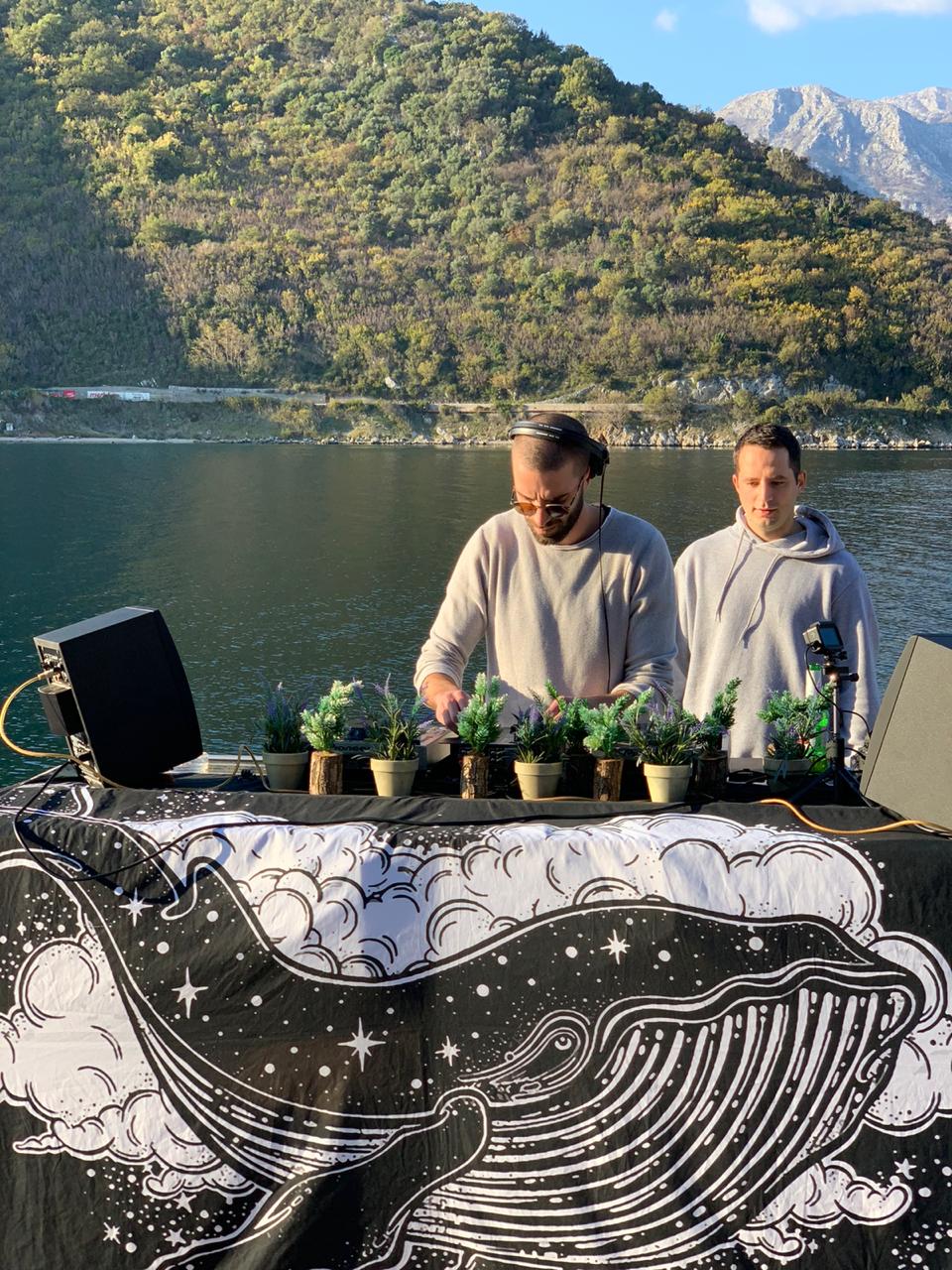 Your productions are often between deep and progressive house. In your opinion, where does your work actually fit and what do you want to present to your listener with your music?

Buba: With my music, I want to convey the emotion I feel while listening and playing, that feeling of freedom while dancing in a given space. I think my work will fit in great with the Engrave LTD label on which I’m releasing soon! It’s a sound I’ve been looking for a long time.

Lèrr: When it comes to production, I work the way I feel at the moment, but in the end it’s always spontaneously deep or progressive. Basically, I try to convey a moment in the music and I hope the listener recognizes that.

Which one of your tracks has made the biggest success so far?

Buba: For now, it’s “Sequence 17” because it’s supported by a lot of good producers, which is a great success for me!

Lèrr: I would say that it is “Anemoia” which was released on “The Soundgarden” label and which Hernan and Nick played in front of some supposedly tens of thousands of people in Argentina.

You have recently been guests of our second birthday celebration via Youtube stream. We are really pleased with how everything went, as well as the sets we had the opportunity to listen to. What was that experience like for you, are you satisfied with the reactions of the audience to your set?

Buba: Yes! And we are very delighted with the recorded set, as well as the reactions of the public during the live stream! It was an interesting experience because it all happened spontaneously. Stefan was in Tivat at that moment, and the agreement began to take place. We thought it would take a lot more time, and in fact we needed very little for the set and organization. We even managed to make a new track that we played in the set! 🙂

Lèrr: Great experience, especially since it was all spontaneous. During the day we agreed to record b2b set and at which location, so I enjoyed it to the fullest. Also thanks to the guys who came out to meet us and filmed and edited it all. As for the reaction of the audience, I couldn’t wish for better. 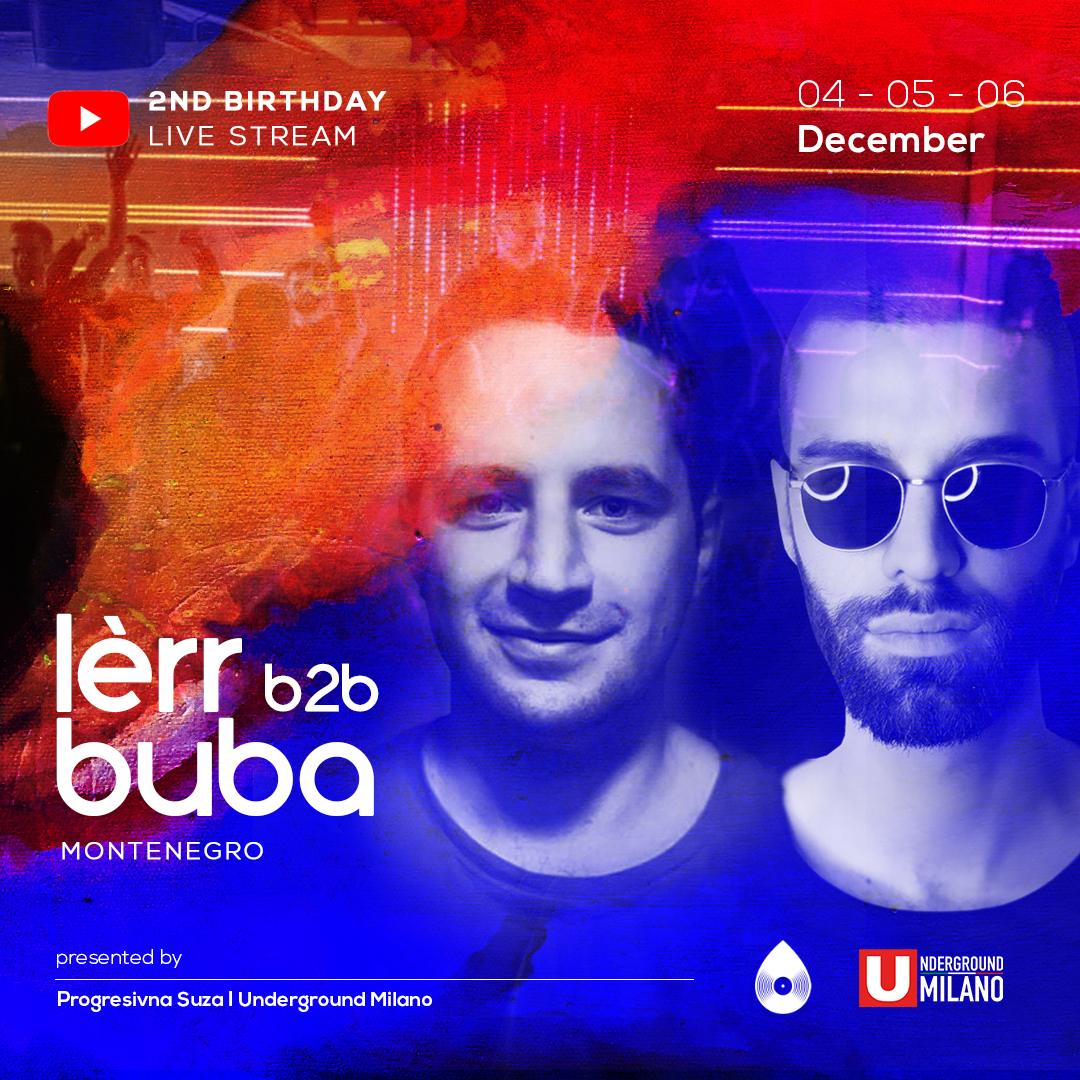 What are your predictions, what will happen to the whole stage, clubs, festivals, performers in the future period …?

Buba: Tough question. I can only guess. The only thing I wouldn’t like is for this to become normal, both for the performers and for life in general.

Lèrr: I hope, like all other colleagues, that this will pass as soon as possible and that everything will return to normal quickly. My opinion is that not much will change when it’s all over, except that maybe local DJs will get more attention.

What are your plans for the future? Can we expect more frequent releases from you?

Buba: I plan to make an EP that I will send to Elke Kleijn because I have good support from him. A remix for “North South Project” will be released soon, and after that the EP in January, we will see later.

Lèrr: For now, the plan is to find the labels for the tracks I finished and to slowly release it all over time. Besides, we can’t plan any more at this point.

Thanks again on this great conversation.